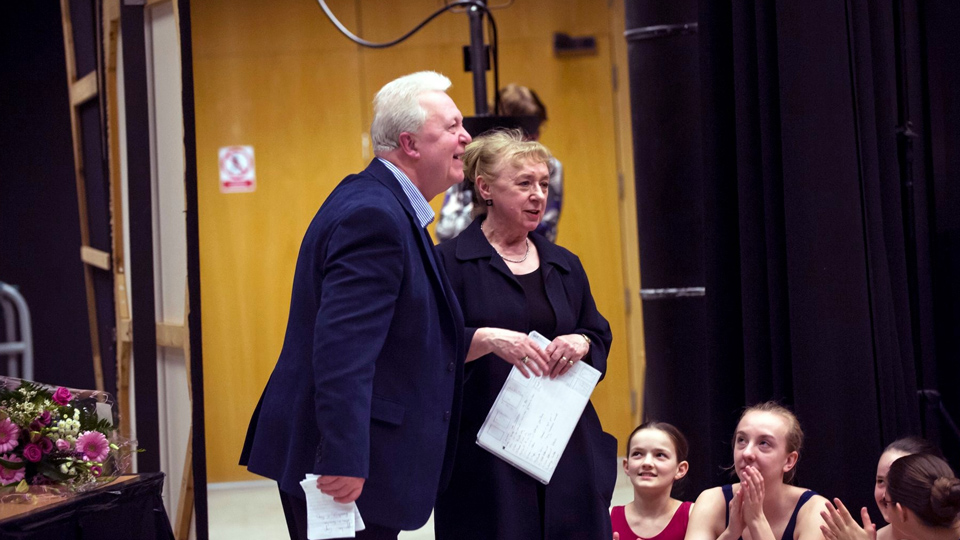 It is with great sadness that we report the death of our former CEO and Artistic Director, John Travis, who passed away on Sunday 2 February. John devoted his life to dance and will be remembered fondly by all those who had the privilege of knowing and working with him. John’s passion for dance took many forms: he was a performer, teacher, educator, director, librarian, archivist, and mentor. His knowledge of the dance world and his passion for the theatre never diminished and inspired students and teachers alike. As we celebrate our 90th Anniversary, we reflect on his lifelong association with bbodance and his enduring legacies.

John’s early training was comprehensive, covering dance, drama and music. He studied with the renowned bbodance teacher, Doris Isaacs, gaining all his examinations with Honours. His talent won him a place at the Royal Ballet Upper School from 1962-64, where he danced the lead roles in the annual School Matinées at the Royal Opera House and Drury Lane Theatre.

John performed regularly with both The Royal Ballet and The Royal Opera companies at Covent Garden and was chosen to perform in the Bolshoi Ballet’s production of Romeo and Juliet. However, it was with London Festival Ballet (LFB) that John found his niche, performing with the company from 1966-1977 and touring the world as a member of the corps de ballet and, later, a First Soloist. During that time, John worked with some of the best-known dancers and choreographers of the day, including Léonide Massine, Rudolf Nureyev, David Lichine, and Antony Tudor. Led by Nureyev, the company made two highly successful tours of Australia (in 1975 and 1978).

John’s lifelong interest in dance history led to the creation of LFB’s first archive (in 1975) and, in the following years, he was instrumental in pioneering dance company education work. Between 1980-1985, John toured the UK and abroad as Head of Education, bringing ballet and the LFB repertoire to schools and community centres. In 1984, his vast knowledge and experience was recognised when he became Assistant to the Director of LFB, John Field.

John’s career development included postgraduate studies, gaining a Diploma in Theatre Archives and Performance Collection Studies from Manchester University and completing a professional placement at the prestigious Dance Collection at the Lincoln Center, New York. When he joined the Northern School of Contemporary Dance in 1989, he immediately set about creating the Library and Archive. During his time at NSCD, he was able to develop his teaching skills and co-ordinate graduate performances and tours.

In 1995, John was appointed CEO and Artistic Director of bbodance, bringing a period of strong leadership and growth which continued until his retirement in 2015. As the culmination of his career, John’s directorship reflected his immense knowledge and experience. His artistic credentials, his understanding of teaching, his vast network of professional friends and contacts and his passion for archives all came to fruition.

One of his greatest legacies was gaining national recognition for bbodance Examinations. Indeed, John had the foresight to see that accreditation of Graded and Vocational Graded examinations was essential for long-term survival.

John was also committed to nurturing talent, as evident in the expansion of the bbodance Scholars Scheme under his guidance. A master of ceremony, John ensured that the annual Dance Days was an exciting and highly anticipated event that brought together members, students and guest teachers, reminiscent of the ‘Concourse’ introduced by the Espinosas. John’s knowledge of bbodance history was legendary and generously shared with members, staff and students — as well as professional dance historians and doctoral researchers.

John was an astute judge of character and, over the years, built a strong and highly respected leadership team. Janet Lupino, who was Examiner Representative from 1994 and Chief Examiner from 2002, remembers him as “a remarkably resilient and courageous Director,” adding,

“He had an amazing generosity of spirit and always welcomed with pleasure all visitors, teachers, students and stars of the theatre into the BBO. As Chief Examiner, I became aware of his ability to overcome problems with patience and good humour. As a good friend, I will miss his bright and caring personality.”

Another of John’s close colleagues and lifelong friends was the internationally renowned dancer and teacher, Brenda Last OBE. Her work for bbodance was a crucial ingredient in the success of the ‘Travis years.’ As she recalls,

“I enjoyed working on the Scholars Scheme and arranging a formidable faculty for Dance Days with John. He was a gentleman of the theatre, good-humoured and sophisticated in his knowledge of dance and theatre.”

It is worth noting that when John took over as CEO and Artistic Director, there were numerous challenges, both within the organisation and in the wider dance teaching profession: The 1990s saw the beginning of increased regulation of dance teaching, a development which John was keen to keep up with. As Brenda concludes:

“Without John Travis, I doubt whether there would be a bbodance today. He took over as CEO and Artistic Director at a very difficult time. With his tenacity he transformed Woolborough House’ bedrooms into offices and lecture rooms, taking the organisation forward and gaining government recognition for bbodance qualifications. It was a huge change of direction for us all!”

John ensured that bbodance was well-represented in the wider dance world. He was a member of numerous dance panels and committees and served as a Trustee for the Council for Dance Education and Training (now known as the Council for Dance, Drama and Musical Theatre), Phoenix Dance Company, Northern Ballet Theatre, the Dance Teacher’s Benevolent Fund, Mark Baldwin Dance Company, and the Lawrence Olivier Dance Awards Panel, amongst others. He was a regular theatre-goer, enjoying all types of dance and musical theatre and an avid collector of theatre programmes – all of which are preserved in the bbodance Archive.


As we come to terms with our loss, we can simultaneously celebrate John’s richly rewarding life in dance and the lasting legacy that we at bbodance have inherited – and will continue to take forward.