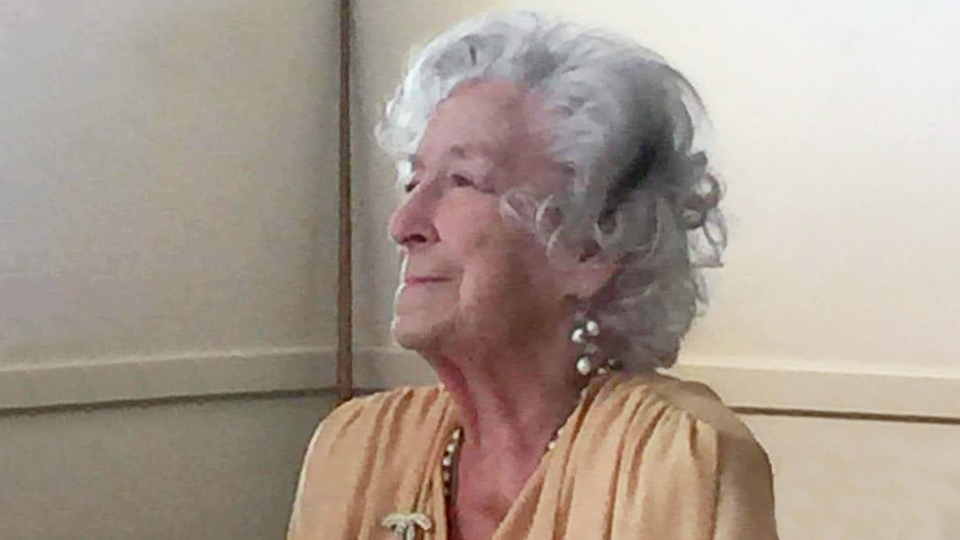 Miss Bellis was taught by our founder, Edouard Espinosa, who referred to her as “his favourite pupil.” She was 102.

From her own recollections and those of former pupils
written by Debbie Clark, Barbara Roberts, and Penny Cooke


Considered having promise by her Ballet teacher in Southport, Nesta Bellis took classes with Edouard Espinosa in Liverpool, then extensively in London. He was a founder member of the Association of Operatic Dancing, an elite group which comprised, among others, Ninette de Valois, Judith Espinosa, and Adeline Genée. Espinosa himself was fresh with memories of the Pas de Quatre dancers, Taglioni, Grahn, Cerrito and Grisi, plunging Nesta into a rich and living heritage of the Romantic era.

She gained her Advanced Ballet and Solo Seal at quite a young age, and when Espinosa split to create the British Ballet Organization in 1930 she taught for him in the provinces and attended the famous Easter Concourses. One day he promised to give two pounds to anyone who could turn the most in a pirouette; she won and kept the money all her life. She especially remembered Espinosa’s drive to have English dancers recognised, a difficult job at the time, which nevertheless resulted in successful performances of Sylvia and other works at the Lyric Theatre. With the war looming and theatres closing, Nesta Bellis settled in Wallasey, married and with a baby.

One of her first six pupils, Barbara Roberts, recalls that she established Wallasey School of Ballet in 1944-45 in her own home. One room was the studio and the other was a waiting room for parents. After a few years the school moved into a hall in Field Road, then Princess Road, then to St Hilary Brow.

Anne Crawley remembers how magical ‘Friday Night’ was for many girls when they reached the standard to attend evening ballet class. They were so fortunate to have a pianist to play for class; Miss Bellis was strict, and discipline was enforced. An amazing lady, she had such a positive input into so many lives. From the early days of the school some students went on to study at the Royal Ballet School among others, and some made dance their career, but most came for the pure enjoyment of ballet which Miss Bellis inspired in her students.

Penny Cooke remembers Miss Bellis' passion for dance and music together with her love of young people, making her a master of her craft. She instilled in pupils the importance of fully expressing the mood of the music through the face "from the eyelashes to the toenails"! Little three- and four-year-olds would perform with delight under her tender care. Knowing that these young cygnets are the roots of a dancing school, she often repeated Espinosa’s advice: look after them, and a school would surely grow. Her artistry was evident in the many dance displays she presented, from choreography to costume designs. She instigated regular involvement in providing dancers for local societies, allowing youngsters to experience live performance; a trait of Wallasey School of Ballet that has remained through the decades.

Brenda Last recalls how she and Ronald Emblen, dancing with Western Theatre Ballet (now Scottish Ballet) and rehearsing at the BBO studio under Edward Kelland Espinosa’s leadership, led to Nesta inviting them to dance at a local theatre near her school, to help the venue.

Sheila Dickie remembers her great sense of humour, how she set students up for life in whatever path they took. She said being kind was more important that being a good dancer, as you would only be a dancer for a short time but a person for life.

Summer Schools at her studio always included prestigious teachers and choreographers, notably Walter Gore, Paula Hinton, Laverne Meyer, and Peter Salmon. John Field and Anne Heaton also taught at these events, and as a member of the BBO Board of Control Nesta was very supportive of their new syllabi in that exciting new adventure for the organisation in the 1980s. She once said the BBO had given her "a wonderful life."

She 'retired' to Cornwall, but never gave up teaching. The legacy of Wallasey School of Ballet continues to thrive to this day.


A Grand Révérence to you, Miss Bellis.